From GBP £53.00
London Zoo is the world's oldest scientific zoo.

It was opened in London on 27 April 1828, and was originally intended to be used as a collection for scientific study. In 1831 or 1832, the animals of the Tower of London menagerie were transferred to the zoo's collection. It was eventually opened to the public in 1847. 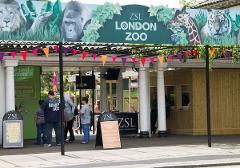