From GBP £49.00
The Rugby Football Union has exhibited memorabilia inside Twickenham Stadium since 1979.

An informal museum was created underneath the South Stand in 1983 before the Museum of Rugby was constructed in the East Stand and officially unveiled in 1996.

In 2007 the Museum of Rugby was renamed the World Rugby Museum to reflect its growing collection and to create a focal point for the heritage and culture of rugby around the world. 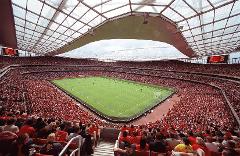