From GBP £44.00
Wembley Stadium is a football stadium in Wembley, London, which opened in 2007, on the site of the original Wembley Stadium, which was demolished from 2002–2003.

The stadium hosts major football matches including home matches of the England national football team, and the FA Cup Final. And many more such as the Foo Fighters and BTS. 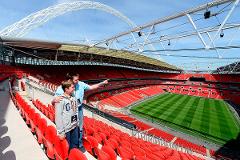